(Pictured above in the Wisconsin hoodie is Matt Guinn.)

The sound of small round metal BBs keep ringing through the thick woods.

A boy has his arms semi-wrapped around a girl’s shoulders as he teaches her how to shoot a BB gun. If the BBs make a “Ping!” noise, then she aimed correctly and a shed about 50-75 yards away was struck again.

Ping! Yes! (I wonder whose shed that was?)

The girl was me. The boy was a boy I had known since kindergarten. In 4th grade, he asked me to be his girlfriend. A few years later, I found myself behind the Pioneer Skateland with him, receiving my first kiss. And, somewhere in there, he taught me how to shoot a BB gun, using someone’s shed as the target.

Sure, this sounds like a story of first love. However, as I reflect on it, it was different for that young girl, starting at age 9. You see, that was the age I told my mom that my babysitter’s husband was sexually abusing me. That was the age I was taken out of 5 years of abuse.

That was the age where I worked hard to forget, and to act normal. That was the year when Matt asked me to be his girlfriend.

We were a “couple” for 4 years. Oh, you know what I mean by couple. We were “going together”, but until our 7th and 8th grade years, we barely spoke. Still, in those years, I was in “like” with someone. I had so many friends: Jolyn, Suzi, Tiana, Michelle, Amy, Holly, Larry, Scott, Ryan, Dion, Christi, Jenny, Christy, Kristy, Denise, Jamala, Candy, Mike, Abe… the list goes on.

I was normal, and Matt was a complete sweetheart.

My memory of the end of our relationship is fuzzy. I’m sure I messed it up. I say that because that was around the time I was raped by a 21 year old man.

I had never thought of that timing until this week. I mean, Matt, one of my oldest friends, my first boyfriend, was sandwiched in between two of the most horrifying times in my life. Along side him were the rest of the Pleasant Valley Grade School kids, making my life pretty normal.

So, why am I thinking of it now?

This week, all the PV kids lost one of the best men we have known. Matt left us on his birthday, September 30th. The news washed us in shock. Even now, I paused to let some tears flow before writing this sentence.

Grief is such a unusual animal. When you lose someone, your brain goes to places and times you may not have visited for years, decades even. Memories like the BB gun shooting that were packed away, not seeing the light of day since I was a kid, flow right back in, reminding me of the relationship we had and moments we shared.

I know this is unpopular to say, but I am so thankful for Facebook right now. I had lost touch with Matt sometime around the end of college. I ran so fast from Illinois and I left that life behind me. However, in my 30s, thanks to Facebook, I was lucky to reconnect with Matt and everyone else I loved in my childhood.

Matt would post on my page each time his beloved Green Bay Packers beat my Bears… which was way too often. Well… actually… not really. Now, I’m glad we almost always lost so he would reach out.

Kim …… I am sending you my deepest condolences for the terrible loss you suffered to the GREEN BAY PACKERS yesterday!! I would have expressed my sympathies sooner but I was preoccupied with a celebration !!

How about those Bears Kimmy !!!

He would connect with me over our mutual love of our cats, comparing stories.

I am paying his tuition and he thinks it’s breaktime!!
Does he look like your kitties?

He and I told each other happy birthday every year.

Happy birthday to one of my favs! I hope the Bears have a fantastic season as a gift to you. (OR is that for me?) #TerribleBirthdayWish

He gave me grief for posting old grade school pictures.

And, then there was that time I was driving down the highway, and I just HAD to pull over and get this picture for him. 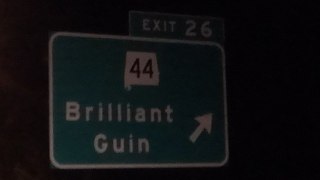 Matt Guinn: never heard of it…. I will have to visit

Kimberly Morrise: I just like that the street sign got it right! You are one brilliant man Matt Guinn! I pulled over to take this picture just for you.

Matt Guinn: You are a rockstar Kim !!!

But even now, as I go through our Facebook connections, I feel it’s not enough.

Tonight, his family held a memorial in Wisconsin. I cannot imagine what his parents, his sister, his nieces, and all his close loved ones are going through right now. I wish I could hug them and tell them he was loved by so many more people than they may realize.

I also wish I had just one more conversation with him. I want just one more chance to say to him that he changed my life. He was that first glimpse into normalcy when it came to my relationship with the opposite sex. I want to apologize for not giving him the credit he deserves… for not always remembering what he and the PV gang meant to me.

Grief can do so many things to our minds. It can make us feel angry, sad, guilty even… but one thing I always get and never expect from it is perspective.

As I sit and wish for just one more moment, I also hope that all the people reading this feel how special Matt was. I want anyone and everyone to know that he was always kind to his friends and he loved animals.

His family shared a story in his obituary that I never knew about him. He would leave food and water out for any stray or wandering cat that might need it. I think that one fact alone can tell you so much about him.

Oh, and let’s not forget… he was a Cheesehead through and through.

Rest in Peace, Matty! Peace is what you deserve.

I can never thank you enough.